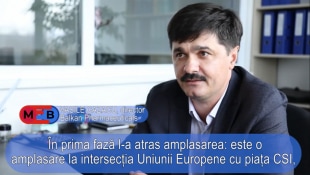 The Romanian investment - Balkan Pharmaceuticals company, launched a medication manufacturing facility in Singera, with a capacity of over 7 million packages per year.

"Investors were attracted by the location: at the intersection of the European Union and the CIS market. So Moldova is a strategic location. At the moment of the investment, taxes were attractive, as well as the fact that the wages claimed by professionals in Moldova are lower compared to the European Union. So there was a conjuncture of factors that convinced the investor to choose Moldova "- declared Vasile Cazacu, general manager of Balkan Pharmaceuticals.

The factory has an area of 10,000 m2 and was built according to GMP (Good Manufacturing Practice) international quality standards. The investments in this project are of over 30 million euros, at this stage. The factory has about 200 employees.