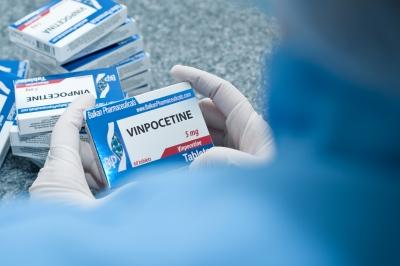 Over 90% of medicines from Moldova are imported. In order to treat themselves, Moldovans pay the costs of import and the trade margins of the drugstores. Only in 2012, the amount spent by consumers on medicines has increased by 21.3 %, compared to the previous year and had amounted 2.3 billion lei. Medicinal preparations would be more accessible for the population, if the share of locally produced medicines will increase in Moldova.

Near Chisinau, in Sangera, is growing an investment of 26 billion euro. It is the new factory of the company Balkan Pharmaceuticals, which will become operational in early September of 2013. The new production complex with an area of 12 thousand square meters will provide 400 well-paid workplaces for highly qualified professionals - doctors, chemists, technologists, engineers, programmers, plus dozens of jobs in the process of distribution.

Mostly, will be employed specialists from Moldova, and for their preparation and training will be involved qualified specialists from CIS and EU. "Our employees will have a competitive salary and working conditions that meet the latest international standards in the field of medicines manufacturing. Our goal is to continue form in Moldova a qualified, competent staff which properly meets the rigors related to pharmaceutical production activity", says Vasile Cazacu, the Head of Record Department of the company Balkan Pharmaceuticals.

"Nearly every week, since we have started working, people from neighboring villages kept approaching and asking what we build, if we need manpower and how could they engage here", says Dan Saveanu, chief engineer.

The company operates on Moldovan market since 2007. Currently, the company has 80 employees and produces 127 names of medicines, including anti-tumor preparations, hormonal preparations, preparations with effect on the nervous system, the cardio-vascular and digestive system, preparations with anti-inflammatory and analgesic effects. In 2008 it had started the project of the new factory, and the construction itself - in 2010.

"Here, at the factory, we develop a qualified system for recruiting young people who are active in the academic institutions. The quality staff is linked with the correct policy of training", states Vasile Cazacu. "In this regard, we intend to implement a program of constant training of the staff. We believe that the labor market in Moldova has a great potential, including young graduates of pharmacy, chemistry, medicine and engineering, who, if properly instructed, would meet the objectives of the company", said the specialist.

Unlike other types of manufacturers, the pharmaceutical field has strict requirements for the production process. Even if now, in Moldova the GMP standards aren't required, the factory in Sangera meets all the requirements.

At the factory where installed a lot of advanced systems, designed to ensure its proper functioning and provide a pleasant and safe working environment for the professionals. The systems maintain the temperature between 20 and 24°C, the relative humidity - between 35% and 65%, the maximum level of noise - 55 dBA, indoor air velocity 0.36 to 0.45 m/s, in order to prevent the deposition of particles, the number of air changes - according to ISO 14644. The BMS/EMS is provided in order to control all parameters, according to the EU and U.S. standards, with validated software Gamp 4-5. The systems are designed to operate automatically. The process is monitored remotely, via an automated and advanced monitoring system, and the access-control system ensures the sterility of the finished product and of the raw materials. Engineers involved in the project say that in Moldova, currently, there are no such systems, from technical point of view.

This makes them think that Balkan Pharmaceuticals, besides the investment in such a great project, has imported know-how on the Moldovan market and also made a technical contribution to the pharmaceutical industry.

Why the prices are decreasing

Balkan Pharmaceuticals' medicines are cheaper than those, imported by other companies. This is possible also because the trade margin applied by company is minimal, having a production yield of approximately 7%, of 15% allowed by law. "Our policy is too produce quality medicines at an acceptable price, based on the purchasing power of ordinary citizens", said Vasile Cazacu.

Since the beginning of its activity, Balkan Pharmaceuticals has conducted several direct actions with social character, the main one being the donation of several of batches of medicines to the Institute of Oncology, totaling about 8 million lei. In addition, the company has conducted charity campaigns at orphanages and boarding schools. The latest activity was sponsoring an employee from the Institute of Oncology with a diagnosis in Israel.

The legal framework in Moldova is favorable for the development of a business. The fact that until 2012 there was no income tax, served as a good point for starting a new business. Also, Republic of Moldova has a large and diversified labor market, and the wages paid in the country are very low, which favors the attraction of good professionals with competitive salary and favorable working conditions. At the same time, there are negative phenomena that have tarnished the investment attractiveness of Moldova, like bureaucracy, corruption, unfair competition and the abusive involvement of some politicians in the development of the pharmaceutical production field.

Balkan Pharmaceuticals company sells 98% of its medicines on Moldovan market. Company's medicines are highly rated on the markets of Russia and Ukraine. After the transfer to the factory in Sangera, the company aims to enter the EU market.