FIGHTING AGAINST CANCER: BALKAN PHARMACEUTICALS DONATED MEDICINES WORTH 1.5 MILLION LEI TO THE INSTITUTE OF ONCOLOGY

FIGHTING AGAINST CANCER: BALKAN PHARMACEUTICALS DONATED MEDICINES WORTH 1.5 MILLION LEI TO THE INSTITUTE OF ONCOLOGY 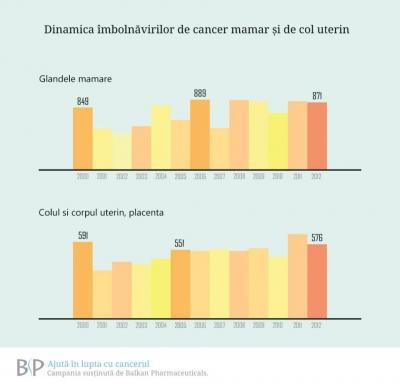 Today, June 7, at the Institute of Oncology, took place the event of donation of a batch of medicines worth 1.5 million lei, from the company Balkan Pharmaceuticals to the Institute of Technology.

The pharmaceutical company has donated 600 boxes of Letrozole and 600 boxes of Anastrozole, anti-hormonal preparations that are administered mostly to women with breast cancer and cervical cancer. The role of these medicines is to stop the release of hormones that, otherwise, will lead to the progression of the disease.

The event was attended by Andrei Usatii, the Health Minister, Victor Cernat, the general director of the Institute of Oncology, Silviu Chiru, the general manager of Balkan Pharmaceuticals company and about 200 doctors.

Andrei Usatii: "the company Balkan Pharmaceuticals and its director, Silviu Chiru, have decided to donate the Institute of Oncology two important preparations for the treatment of cancer. It is a good event that perfectly fits into this week, that isdedicated to cancer prevention. On the agenda of Health Ministry, the Institute of Oncology is a priority institution in terms of technologic and information modernization, with medicines and everything related to rapid and correct diagnosis, as well as proper and high quality treatment. On this occasion, I would like to thank the director of Balkan Pharmaceuticals. I wish you the same inspiration and dedication in your further activity".

In turn, Silviu Chiru, the director of Balkan Pharmaceutical, has mentioned company's willingness to help, whenever the Institute of Oncology needs such medicines. "Through this donation, we've decided to join the fight against this serious malady, especially since we are in the Cancer Prevention Week. The problem of public health is not just the problem of authorities. It is also the problem of each of us. That's why we welcome the involvement of organizations and companies in the promotion of a healthy lifestyle, the rational use of medicines, prevention and treatment of diseases. Especially important is the role of private companies, because they have the potential and the necessary means for a direct contribution in order to solve such problems as is the treatment and prevention of cancer".

The donation of medicines was organized during the "Anticancer week", which is held in Moldova between June 3 and 8. In the last 25 years, the number of people diagnosed with cancer, is increasing. According to the Institute of Oncology, in 2012 were taken on record 8204 primary patients, more than in the previous year (8080). But, the number of patients whose tumors were detected in early stages has also increased - 37.5% in 2012, compared to 34.3% in 2011.