THE INSTITUTE OF ONCOLOGY HAS RECEIVED MEDICINES AMOUNTING 1.5 MILLION LEI, THAT WERE DONATED BY A PHARMACEUTICAL COMPANY

THE INSTITUTE OF ONCOLOGY HAS RECEIVED MEDICINES AMOUNTING 1.5 MILLION LEI, THAT WERE DONATED BY A PHARMACEUTICAL COMPANY 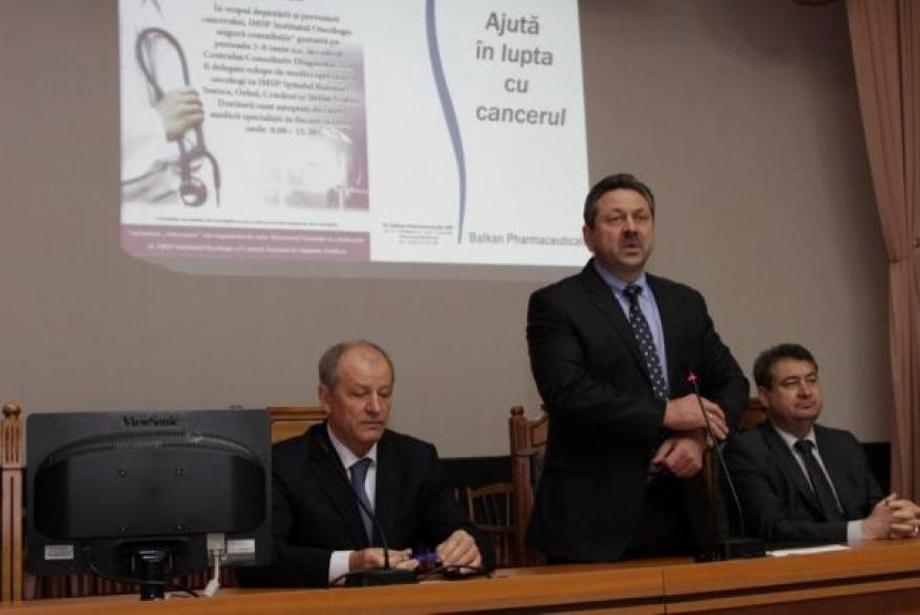 The Health Minister, Andrei Usatii, director of the Institute of Oncology, Victor Cernat and the director of the Medicines Agency, Alexandru Corman, have attended the reception of medicines, donated by Balkan Pharmaceuticals.

600 boxes of Letrozole and 600 boxes of Anastrozole, donated by Balkan Pharmaceuticals, will be used to treat women suffering from breast cancer and cervical cancer.

The medicine manufacturer, Balkan Pharmaceuticals, donated today 600 boxes of Letrozole and 600 boxes of Anastrozole, amounting 1.5 million lei, to the Institute of Oncology. The two pharmaceutical products are, in fact, anti-hormonal preparations, necessary especially for women with cervical cancer and mammary gland cancer.

The donation was made within the campaign "Help to fight cancer", conducted by Balkan Pharmaceuticals on the occasion of anticancer week. The reception of the 1200 boxes of medicines was attended by the Health Minister, Andrei Usatai, the director of the Institute of Oncology, Victor Cernat, the head of Medicines Agency, Alexandru Corman, as well as by Silviu Chiru, the general manager of Balkan Pharmaceuticals.

"Through this donation, we've decided to join the fight against this serious malady, especially since we are in the Cancer Prevention Week. The problem of public health is not just the problem of authorities. It is also the problem of each of us. That's why we welcome the involvement of organizations and companies in the promotion of a healthy lifestyle, the rational use of medicines, prevention and treatment of diseases. Especially important is the role of private companies, because they have the potential and the necessary means for a direct contribution in order to solve such problems as is the treatment and prevention of cancer", said Silviu Chiru.

"About 400 patients will benefit from these medicines. Women are making 14-15 cures per year. We have a low stock, but with the donation we received today, it will be enough until the end of the year", said the director of the Institute, Victor Cernat.